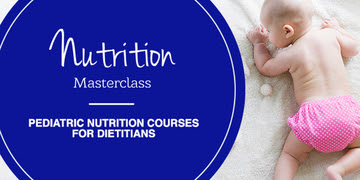 A few months back, we presented for the Primary Care Dietitians’ Association on the Top 5 Infant Feeding Challenges we run into as pediatric dietitians.

Not surprisingly, Non-IgE Mediated Cow’s Milk Protein Allergy made the list. More and more often, the terminology you will see commonly used in the literature for this condition is Food Protein-Induced Allergic Proctocolitis (FPIAP). Try saying that out loud five times fast!

A Brief History of FPIAP

In Mennini’s 2020 review article, FPIAP is characterized by inflammatory changes in the distal colon in response to food protein. Infants with FPIAP usually present with red blood and mucus mixed with the stool, with or without diarrhea. Some of these infants are fussy and irritable, but most affected infants appear generally healthy. The diagnosis of FPIAP is based on clinical symptoms, general resolution of these symptoms with an allergen-free diet and recurrence of symptoms with a challenge of the allergen.

It’s estimated that 64% of infants with blood in their stool have FPIAP.

Wait a second … that means that in 36% of infants with these symptoms, food protein is not the culprit.

The literature confirms our professional experience of cow’s milk protein (CMP) being the most common trigger allergen in FPIAP, with a reported prevalence of around 60%. In addition, 5% of infants with FPIAP have been identified as having multiple food allergen triggers. (Mennini 2020)

What we’re often seeing in practice:

But this is the thing … the literature is recommending much earlier challenges.

Mennini 2020 reported that blood in the stool typically clears within 1-2 weeks of complete removal of the offending allergen, usually within 3-4 days.

With this information, it’s not completely surprising to hear that if the removal of CMP has been an effective treatment, both Mennini 2020 and 2019 iMap Guidelines recommend an early challenge with CMP to confirm the diagnosis. Really early. Fox is suggesting 2-4 weeks for a challenge and Mennini is suggesting 3-4 days!

What’s in it for Your Patient?

We know what you’re thinking. A family has finally found a solution to the issue at hand. Why mess with that?

These situations have varying complexity and need to be looked at on a case-by-case basis. A happy baby with 1-2 episodes of blood in their stool is a lot different than one who is inconsolable, having daily bloody stools and falling from their growth curve.

In breastfed infants, 20% have spontaneous resolution of bloody stools without changes to the breastfeeding parent’s diet. (Mennini 2020)

In 12% of infants, the offending allergen could not be identified and intermittent blood in the stools continued. (Mennini 2020)

If the infant’s symptoms do not resolve with removal of CMP, should additional allergens be removed? And this is where it gets a little blurry. The literature is varied in terms of reported incidence of FPIAP allergen triggers outside of cow’s milk, as you see here: 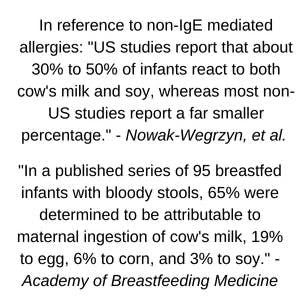 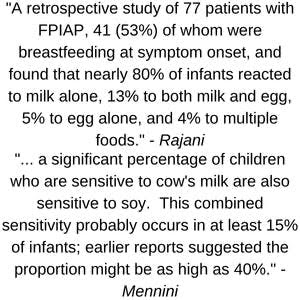 In practice, most commonly we’re seeing soy removed as a step two, followed by egg. But it does feel like a bit of a needle in a haystack type of situation. How far down the list of allergens do you go?

Think a bit further down the line. How many families have you met where the breastfeeding parent is on food elimination #10? Where unintentional weight loss is happening in the parent and quality of life is being drastically affected? What about a dyad where the likelihood of breastfeeding continuation is lowering with each passing day. I see these families on a weekly basis in my practice and to say they are struggling would be an understatement.

Action Steps You Can Take in Your Practice

If you have a patient or client with resolution of symptoms with removal of CMP, have an early conversation with the family and medical team about challenging. Each family is unique and what is reasonable for one family may not be reasonable for the next.

Weigh the pros and cons of multiple allergen eliminations, especially in a breastfed infant. If the infant is thriving, but continues to have occasional blood in their stool, where is the line drawn in trying to identify the trigger?

Food for thought! The world of infant nutrition is never black and white.

As always, we’d love to hear about your experiences in your communities with families of infants with food allergies.

P.S. Want to learn more about infant food allergies and up your game in infant nutrition? Our flagship course, Infant Nutrition Essentials, is open HERE for registration now.